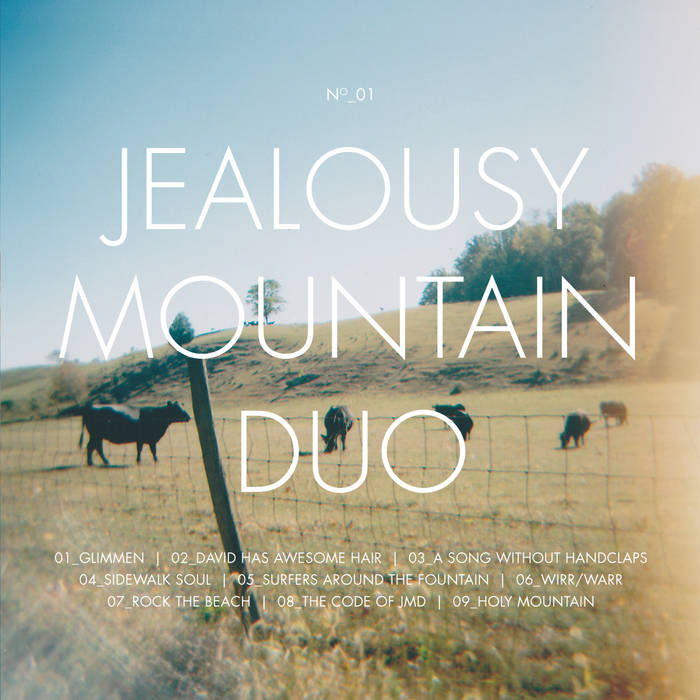 Jealousy Mountain Duo — Two-man German band Jealousy Mountain Duo’s self-titled longplayer was released by experimental German label Blunoise, a perfect portmanteau of Jealousy Mountain Duo’s disparate ’60s jazz and noisy, math-rock influences. Jealousy Mountain Duo takes a deconstructivist approach to its experimental blend of post-modern jazz and mathy indie rock, its guitars looping looping and conflicting melodies, its drums working in and out of rhythms, eschewing any semblance of straightforward timekeeping for an abstract counterbalance to the swirl of notes and tones. The result is tightly controlled chaos, a sonic maelstrom where form doesn’t necessarily follow function. This, truly, is radical stuff. In both senses of the word. P. Wall

This album has moments of intensity, but it's a very intimate album.
Guitarist Berger plays with mostly clean tones, and these songs are built around his employment of a looping pedal, over which the duo builds slowly evolving compositions.
Using a looping pedal introduces a bit of a formula into most of these songs: typically a "bass part" or relatively simple riff is looped, and more complex parts are added over the top. But Berger mixes up his approach, sometimes looping higher parts first and performing lower riffs "underneath," sometimes looping rhythmically busy passages and playing long tones over them, and he continues to feed different parts into loops as the music evolves, sometimes recording extra parts toward the beginning on songs that don't get introduced into the songs again until much later, like the moments of intentionally microtonal guitar used in "Sidewalk Soul." Loops are sometimes used in reverse, too, adding a nice contrast in articulation.
Jazz influences seep into this record's drum work, sounding like a blend of Zach Hill and a Buddy Rich solo at the most hyper moments.
Schneider must be applauded for the quality of this recording, too, which is a sensitively captured live-to-1'' tape affair. The drums are rich and warm, and the complex overtones of Berger's amp going into a touch of overdrive when it's overwhelmed with multiple loops is faithfully reproduced. This is one of those rare records that I'm guessing represents the sound of this band almost exactly as they are live.
Speaking of which, I was very bummed to realize that Jealousy Mountain Duo toured the US last fall--just missed 'em by a few months! Fortunately, they're planning another fall tour of the US for this year, and also hoping to make another record. If you're in the US, keep an eye out for Jealousy Mountain Duo dates around October. And if you want to investigate either of these albums in more detail, you can go to the Blunoise Records website, or you can find Jealousy Mountain Duo on Bandcamp.

Bandcamp Daily  your guide to the world of Bandcamp

New sounds from Mavi, Ivy Sole & Moderator, plus AJ, the One joins the show, for her latest release